Here is my idea for the honors event, a central theme to run with for this event, so that way all the different ideas people have can be connected to one main theme.

The theme can be Benjamin Franklin: The pathway to success.

We can have a small poster-board which can briefly outline the different parts of Benjamin Franklin’s life. For example: Franklin the author, Franklin the printer, Franklin the politician, etc. This way, more people can connect with Franklin on a topic and will better understand what they will expect once they enter our event

Overall, this theme will allow visitors to understand the different ideas and how they all correlate to Benjamin Franklin and also give our event a sort of coheiveness, so that it doesn’t seem like we are all over the place with different part’s from Franklin’s life. 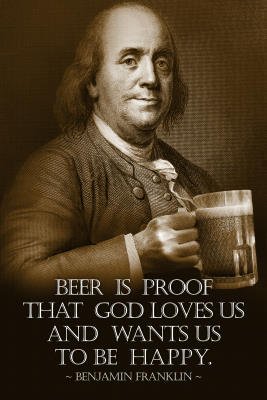 “Beer is proof that God loves us and wants us to be happy.” We’ve all seen this quote among mugs and shirts in various trinket shops around Boston, but has anyone actually questioned the legitimacy of this famous quote? If one decides to research this quote, curious of the authenticity of it’s origin, they are in for a surprising conclusions. This famous quote, attributed to our founding father Benjamin Franklin, is actually false.

As it turns out, Franklin was never a huge lover of beer, though he did enjoy it in moderation. In fact, when Franklin was writing his autobiography, he specifically mentions distaste for his fellow printers when they would drink beer while working. As Franklin said: “At my first Admission into this Printing House, I took to working at Press, imagining I felt a Want of the Bodily Exercise I had been us’d to in America, where Presswork is mix’d with Composing. I drank only Water; the other Workmen, near 50 in Number, were great Guzzlers of Beer. “However, that does not mean Franklin had an aversion towards all alcohol, in fact Franklin was a great lover of wine. As for how the confusion with the quote began, one could speculate that it was the result of a letter Franklin wrote to one on his friends.

In 1779, while in France, Franklin wrote to his friend, André Morellet, a famous writer and philosopher, among other things (1727–1819). The quote read as such:

We hear of the conversion of water into wine at the marriage in Cana, as of a miracle. But this conversion is, through the goodness of God, made every day before our eyes. Behold the rain which descends from heaven upon our vineyards, and which incorporates itself with the grapes to be changed into wine; a constant proof that God loves us, and loves to see us happy!1

This quote certainly helps spread some insight into how this quote may have started, but it still doesn’t explain how it got misinterpreted. As we know, history can be similar to a very long game of telephone, where information gets broken up and distorted as it is passed down from person to person. Because of this, we may never know how this quote was first misinterpreted and spread out.

Still, as it happens, there may be an answer after all. In 1778, Franklin came back to his London printshop which he had operated 40 years prior. After finding the same printer which Franklin had worked on, Franklin is said to have celebrated with his fellow printers by ordering rounds of beer for all of them. This provides a little more insight into the history behind this quote and a somewhat feasible explanation for how it became so misconstrued. Regardless, even though Franklin may not have actually said ” Beer is proof that God loves us and wants us to be happy”, it’s safe to say that the quote is not going anywhere anytime soon and neither is the legacy of one of the most famous people in American history, Benjamin Franklin.

This essay, written by one of the founding fathers of our country and one of the most prominent minds of the era, Benjamin Franklin, is about farts. The seriousness that Benjamin Franklin had about this topic is open to interpretation, with some saying he actually meant for this discussion to make a scientific impact, and others saying he is facetious . Regardless, when Franklin wrote this essay he discussed three main topics. The first, to discuss why “releasing wind” in public is viewed as a negative thing.  According to Franklin believed that the only reason it was viewed as negative was because of the smell it produced. The second and more important reason Benjamin wrote this essay was to discuss the possibility of creating a drug which could make your farts smell better. A third was for fun, since this essay was actually meant to be a joke between him and his friends.  However, I do believe that when writing this essay, Franklin truly believed that this topic deserved scientific study. Franklin did know that your farts could change smell depending on your diet, but he was convinced that a drug which could make your farts smell like perfume, no mater what you are eating, could be possible. Not only that, Franklin said this would be one the biggest breakthroughs in scientific history. Now, as for whether or not he was serious on this matter is not clear, it is known he was an inventor, but this is just ridiculous.

Overall, the context of the essay dealt with the discussion of farts and how they can be revolutionized if they could control how they smell. Even with the satirical nature of this essay,  which involved Benjamin Franklin referring to farting as Fart-hing,  it was referenced in a recent journal article from The Huffington Post. In this article, the focus is about a  new pill, that makes farts smell like chocolate. This invention was created by Christian Poincheva, and just the fact that he decided to create this pill is quite interesting on. Still, whether or not it can be considered a direct result of Benjamin’s essay is another discussion entirely. Poinchevall does not make mention of being influenced by Franklin’s essay while creating his work.

Still, even though Franklin’s essay may not have attributed directly towards Poinchevall’s work, it still did raise an intriguing question of why somebody should invent a pill that would make farts smell as sweet as breath pills make bad breath smell sweet. “My Prize Question therefore should be, To discover some Drug wholesome & not disagreable, to be mix’d with our common Food, or Sauces, that shall render the natural Discharges of Wind from our Bodies, not only inoffensive, but agreeable as Perfumes”. It seems that Franklin meant for this essay to be a jibe to other scientific breakthroughs in recent years, using this essay as way of expressing his distastes in a humorous way.

In the fifth essay under Benjamin Franklin’s pen name Silence Dogood, Benjamin Franklin is directing his letter to the author of the New England Courant, A.K.A his Brother, by reading a response to one of Franklin’s previous essay from a man who did not respect Silence Dogoods views, which was written by Benjamin under another fake name. According the man, Silence Dogood should “begin with your own Sex first: Let the first Volley of your Resentments be directed against Female Vice; essentially calling Silence Dogood a petty women writer who should focus on the faults of her own sex rather than men’s. Franklin’s rebuttal  was that men are just as guilty of sin as women, and that they both have equal share in sins. This beginning allowed Franklin to set up his essay, and begin discussing the topic of the faults of men and the shameful acts done to women.

Benjamin continues to further his argument as the essay goes on, adding more facts and examples to bolster his view on the mistreatment of women in society. Benjamin makes an argument about the education of women, where they were taught some basic writing lessons and being trained how to sew and cook. From this, Benjamin says “What is a Man (a Gentleman, I mean) good for that is taught no more? If Knowledge and Understanding had been useless Additions to the Sex, God Almighty would never have given them Capacities, for he made nothing Needless”, which leads to Benjamin asking what women did to deserve this mistreatment. This errata of men mistreatment of women is the main theme in Benjamin’s essay, and is a strong point in Benjamin’s essay, and makes the male saying of “Female Ignorance and Folly” seem more parallel to men than women. I agreed with all of Benjamin’s points, and support him in his statements that men have committed many more errors than women ever have. It was because of this essay that I now view Franklin as a pro-feminist figure, or at least, associate with his alternative personality Silence Dogood. It also makes Benjamin’s decision to go under a pen name all the more clever, since this pro view on women was ahead of it’s time, and would have resulted in Benjamin being persecuted by many individuals had his identity had been revealed. When walking past the old Boston City Hall, most people would not imagine that within it’s gates lies a statue of one of the most prominent figures from United States history placed right in front of it. This statue is of Benjamin Franklin, standing 8ft tall and being made entirely of bronze. On the pedastal where the statue stands, there is also four plaques depicting important moments from Benjamin Franklin’s history, both from his personal life and his politcal career. One side of the statue illustrates Benjamin’s life as a printing apprentice to his older brother, alluding to Bejamin’s later printing buissness in Philadelphia. Another plaque shows Benjamin Franklin’s scientific and creative personality, depeicting Benjamin as he studies electricity and is attempting to learn if lighting is actually electricty through his famous kite and bronze key experiment. The later two plaques showcases Benjamin Franklin’s large role in American History. One of the plaques shows Benjamin Franklin’s signing the Declaratin of Independence alongside those of John Adams and Thomas Jefferson. The fourth plaque is a depection of Benjamin Franklin role as an American diplomat during the Revoltionary war, portraying Bejamin Franklin as he secures a treaty with France to assist the United States in the Revoltionary War. Benjamin Franklin was not just a smart and successful man, but also a key figure in the birth of country.